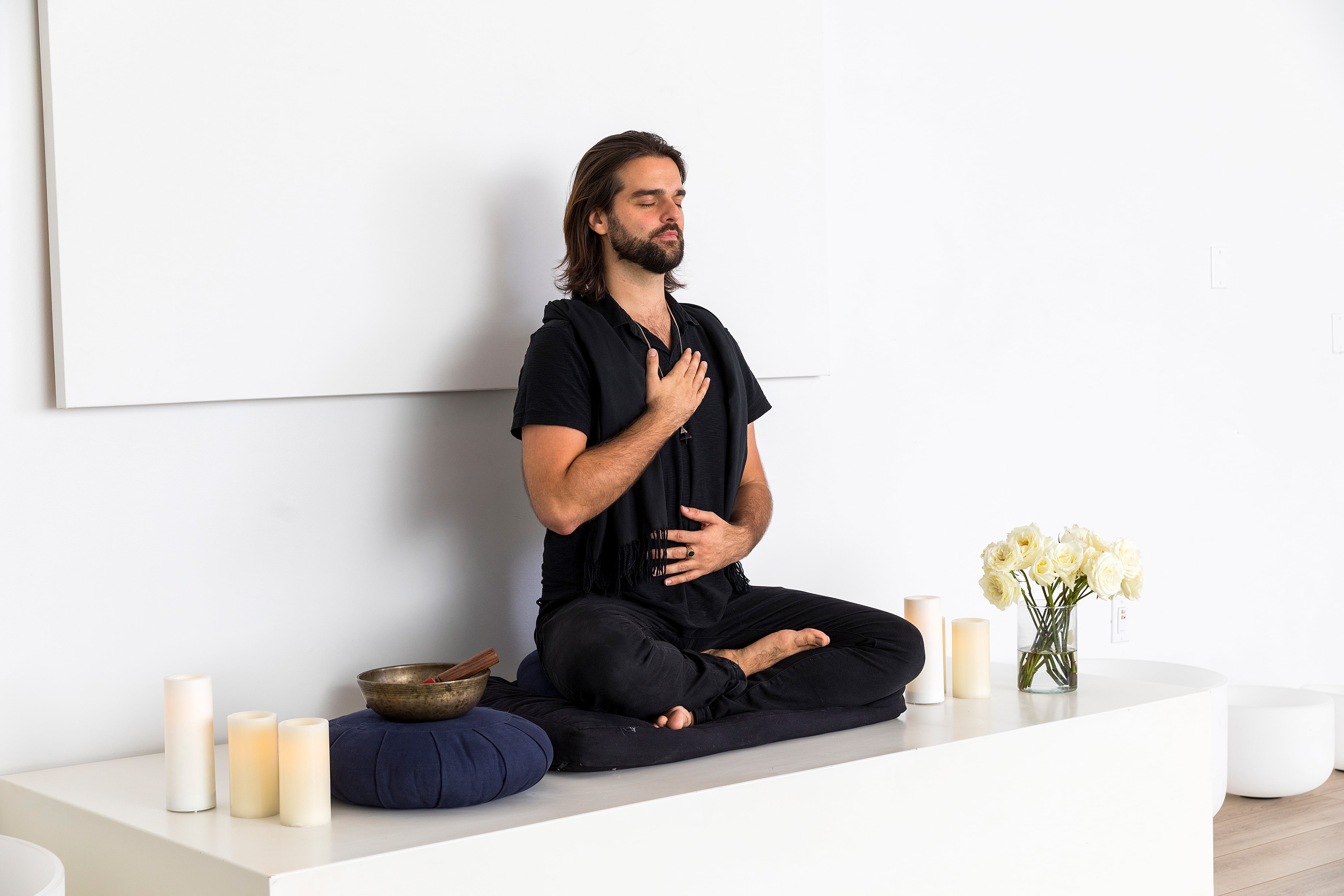 Ben Decker, is a social activist, meditation teacher, energy worker, and entrepreneur. He’s the author of Practical Meditation for Beginners, a cross-disciplinary guide to ten different meditation techniques, the traditions that practice them, the scientific studies revealing their physiological efficacy, and instructions for their many real-life applications.

His love for meditation & the spiritual teachings of ancient traditions goes back to childhood. Ever the idealist and enthusiastic learner, this enthusiasm for meditation has won him praise by Conscious Lifestyle Magazine as “one of the world’s leading meditation teachers,” and Well + Good as a “superstar meditation instructor.”

Ben has shared his love of meditation with thousands. His work is universal, well-rounded and rooted in ancient wisdom & modern pragmatism and has also been featured in Cosmopolitan, Men’s Health, Face the Current, Evolve & Ascend, Spirituality & Health, Thrive Magazine, LA Yoga, and more.  Ben is a founding Meditation Teacher at the most prominent meditation studios in Los Angeles, including Unplug Meditation, The DEN Meditation, Wanderlust Hollywood, and Mystic Journey. A lifelong meditator, the spiritual household of his youth held strong emphasis on discipline and spiritual development.  Modern, entertaining, and easy to understand, Ben’s classes take even the novice meditator into a deep exploration of their own psyche.

In Fall of 2016 he launched his first online meditation offering on the Unplug Meditation Guided Meditation App. He worked closely with anti-human trafficking organization Unlikely Heroes in the United States and The Philippines and received the Unlikely Heroes Legacy Award in 2012.

He also supports the efforts of anti-human trafficking organizations Children of the Night, Saving Innocence, International Justice Mission, The Somaly Mam Foundation, and Together 1 Heart, as well as humanitarian aid organizations Generosity.org and the American Red Cross. As a political activist, he is campaigning for Marianne Williamson’s 2020 Presidential Campaign.

In the past he campaigned for Williamson’s 2015 Congressional run, and has also campaigned for Senator Bernie Sanders and Congressman Tim Ryan. Once praised by Forbes as a “legendary PR maven,” and “a shining example of the talent the philanthropic community needs to attract,” Decker left a prolific career in Hollywood to dedicate his professional life to sharing the universal teachings of global ancient traditions and conscious activism.

The Ancient Greek aphorism “Know Thyself” was said to have been written on the entrance to the front courtyard of the temple of Apollo, the god of Light.

In Buddhist tradition, the state of cosmic wisdom and divine understanding is often referred to as Enlightenment.
learn More

In the Judeo Christian Islamic traditions, we read that Light is the first creation of God. Join us as we take the journey within, declaring the divine imperative in the darkest places of our inner worlds, saying with confidence, bravery and strength, “Let there be light!” In this retreat, we will practice the tools of meditation, yoga, mindful eating practices, and experience luxurious health treatments to facilitate the peace and clarity of mind to explore what it means to examine our own psyches and confront our own unwanted behaviors.

As the light of our awareness rests in the deepest corners of our minds, we begin to heal and grow beyond our past, our limitations, and our fears. Guests will have the opportunity to participate in authentic shamanic plant medicine ceremonies, rainforest zip lining tours, horseback riding, and additional workshops on manifestation & self motivation and empowerment.

“Rythmia Presents” is a workshop series of interactive experiences with your favorite thought leaders, cultural creatives and change makers to help you activate new thinking and receive inspiration to become more authentic and awakened. As our gift to you, these up close and personal experiences with these luminaries are included in your visit.

Rythmia specializes in life transformation, health and wellness using the most breakthrough modalities. 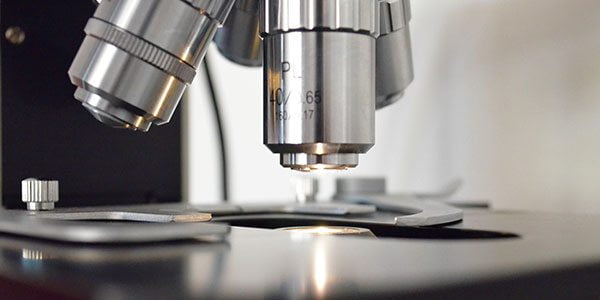 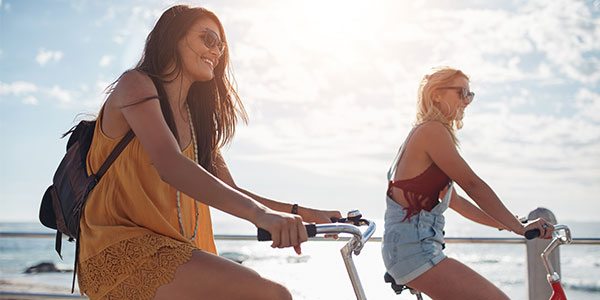 Over 40 bikes onsite for guests use for riding off property to nearby sites or a quick pedal over to the beach (less than 10 minutes). 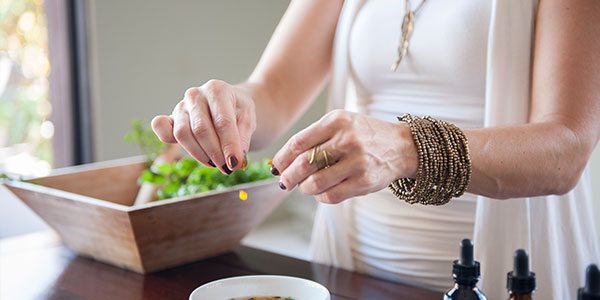 We have the most complete and safe colon hydrotherapy treatment in the world for cleansing the internal organs and digestive system. Removing waste from the large intestine activates your body’s natural ability to heal itself. 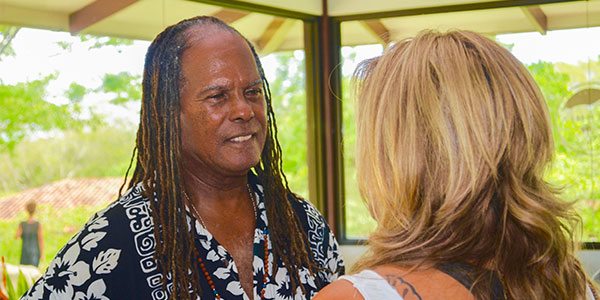 Our life coaches will address specific conditions and transitions in your life, by examining what is going on right now, discovering what your obstacles or challenges might be, and co-creating a course of action to guide you towards the life you aspire to have. 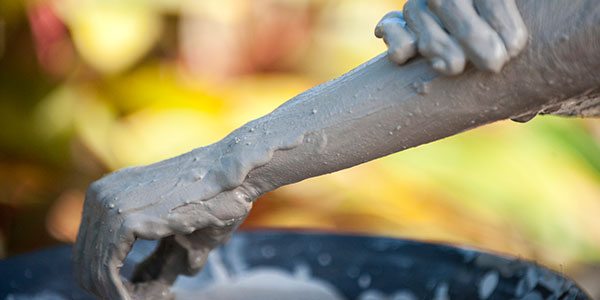 Draw out the toxins and impurities from your body as the volcanic ash exfoliates to soften your skin.

Healing touch practitioners use essential oils during your massage in private treatment rooms. Your week includes 1 one-hour massage. Additional massages are available for a fee. 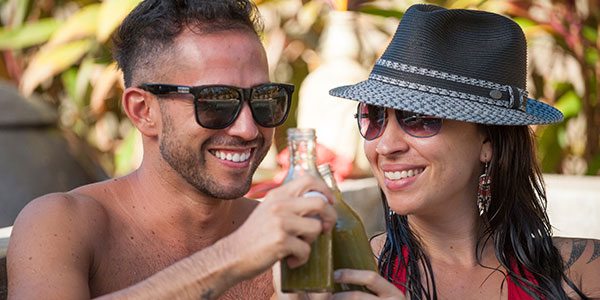 Relax in the steam room or geothermal water jacuzzi with jets to invigorate your circulation. 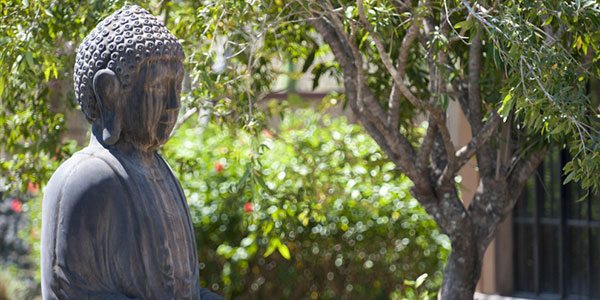 The Eco natural landscape provides for a peaceful experience. Choose to meditate alone in front of the labyrinth or many buddha’s or join the group for a guided meditation with one of our shaman’s.

Fresh juices created by our Nutritarian are a combination of local market fresh fruits and vegetables served during meal times. Also available is a Juice Program, for an additional $20 per day. Examples include an energizing Green Jolt Juice or body nourishing Blood Builder Juice. 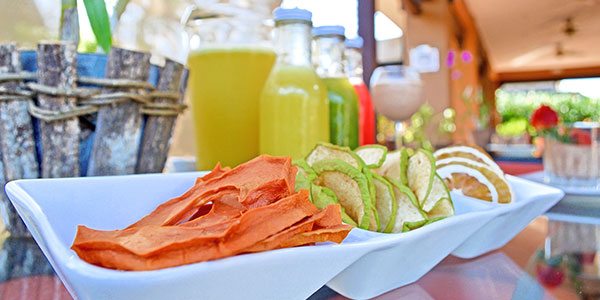 We are committed to locally sourced, farm-to-table organic food and provide our guests with three meals a day. Our Nutritarian presents foods that are of the highest vibration, innovative and creative, and of course nutritious and healthy.

NOTE: All Pricing is Subject To Change

Subscribe to our newsletter by simply entering your name and email:

This Cleanse is Written in the Dead Sea Scrolls!

Quote from dead sea scrolls: “Think not that it is sufficient that the angel of water embrace you outwards only.  I tell you truly, the uncleanness within is greater by much than the uncleanness without. And he who cleanses himself without, but within remains unclean, is like to tombs that outwards are painted fair, but are within full of all manner of horrible uncleannesses and abominations.  So I tell you truly, suffer the angel of water to baptize you also within, that you may become free from all your past fears, and that within likewise you may become as pure as the river’s foam sporting in the sunlight.”

“Seek, therefore, a large trailing gourd, having a stalk the length of a man; take out its inwards and fill it with water from the river which the sun has warmed. Hang it upon the branch of a tree and kneel upon the ground before the angel of water, and suffer the end of the stalk of the trailing gourd to enter your hinder parts, that the water may flow through all your bowels. This will free your body from every uncleanness and disease. As the water runs out of your body, it will carry away from within it all the unclean smelling things of fear. And you shall see with your eyes and smell with your nose the abominations, and uncleannesses which defiled the temple of your body; even all the fears which abode in your body, tormenting you with all manner of pains. I tell you truly, baptism with water frees you from all of these. Renew your baptizing with water on every day of your fast, till the day when you see that the water which flows out of you is as pure as the river’s foam.  Then betake your body to the coursing river, and there in the arms of the angel of water render thanks to the living God you are free from your fear. And this holy baptizing by the angel of water is: Rebirth unto the new life. For your eyes shall henceforth see, and your ears shall hear. Fear no more, therefore, after your baptism, and the angels of air and of water may eternally abide in you and serve you evermore.”

After the Cleanse you are rare in the world. You have fewer worms, parasites, mucus, ropes, pepper stems, metals, chemicals, pills, liver and gallbladder stones, and other assorted lifetime accumulations than most people you know. Your sugar, blood pressure and cholesterol levels are normal! Your skin looks radiant and you remember your glow!  It’s okay to be the one you have been waiting for, if not you, then who; if not now, then when?  You can do it later, maybe?  What if later never comes?

The Dead Sea Cleanse is the most complete hydrotherapy treatment in the world.

Rythmia LAC is a holistic health center meaning we address the ‘whole’ of each and every individual. The Dead Sea Cleanse is the most progressive treatment in the world for cleansing the internal organs and digestive system. It is of paramount importance to have a clean vessel and heal the physical body to which your spiritual self can reside. Scientific evidence has shown that what we put in our body and the microorganisms that inhabit our body play a monumental impact and how we feel and act.

The Dead Sea Cleanse is a 12 day complete cleansing process that addresses the body, mind, and spirit by helping your physical body catch up with your consciousness. Rythmia offers you this world famous cleanse alongside all of our other therapies at no additional cost!

At Rythmia, we are utilizing an enhanced program which combines many age-old processes and techniques to offer you one of the most comprehensive and amazing premiere cleanses there is in the world. Due to Meghan Pearson’s extensive experience with physical health and nutrition, this program is truly one of a kind. The Dead Sea Cleanse can be your jumpstart to a new healthier life full of energy and vitality with a clean slate to employ better diet and life practices. 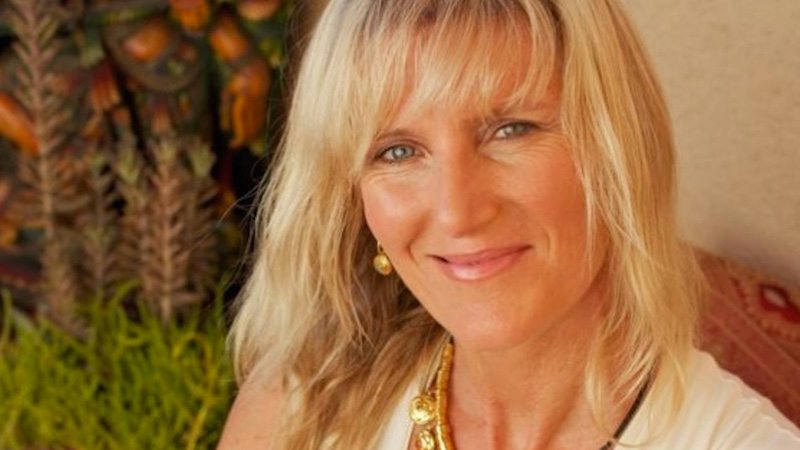 Movement is life for Shiva Rea, M.A, global yoga teacher, activist, and innovator in the evolution of vinyasa yoga around the world from large-scale festivals and conferences to unplugged retreats.

At Rythmia, movement and growth are the primarily outcomes which we are helping individuals achieve in their physical, mental, and spiritual lives.

Yoga is a discipline known worldwide for it’s amazing physical and mental benefits through its tandem use of exercise and meditative practice. The yogic practice is such an amazing tool for transformation that we have chosen a world famous specialist to guide our yoga program. Rythmia is blessed to welcome the amazing Shiva Rea into our space to sponsor our on site world-class Prana Vinyasa yoga practice included for free in all programs.

Yoga practice is a vital part of the everyday activities at Rythmia and we encourage all guests to take advantage, no matter your comfortability with yoga, as it is for both beginners and experts. Multiple classes occur throughout the day and at times where every guest, no matter the program, will be able to attend for no additional cost.

Prana Vinyasa Flow Yoga is an energetic, creative, full-spectrum approach to embodying the flow of yoga cultivated by Shiva Rea and the Global Vinyasa Collective of Teachers. Students of all levels are empowered to experience prana – the universal source of breath, life-energy and conscious intelligence – as the navigating source of yoga practice and vital living. Practitioners learn classical and innovative approaches to vinyasa yoga and the state of flow drawn from Krishnamacharya’s teachings, Tantra, Ayurveda, Bhakti, Somatics and Shiva’s teaching experience from the last fifteen years.

Rythmia is so dedicated to this part of your program that we have designed and built Yoga temples dedicated to your own practice. Classes will be occurring both in the morning and evening and are both great ways to either enter a day of healing or complete all that you have learned and experienced.

By submitting the information above, you agree to the our terms of service.